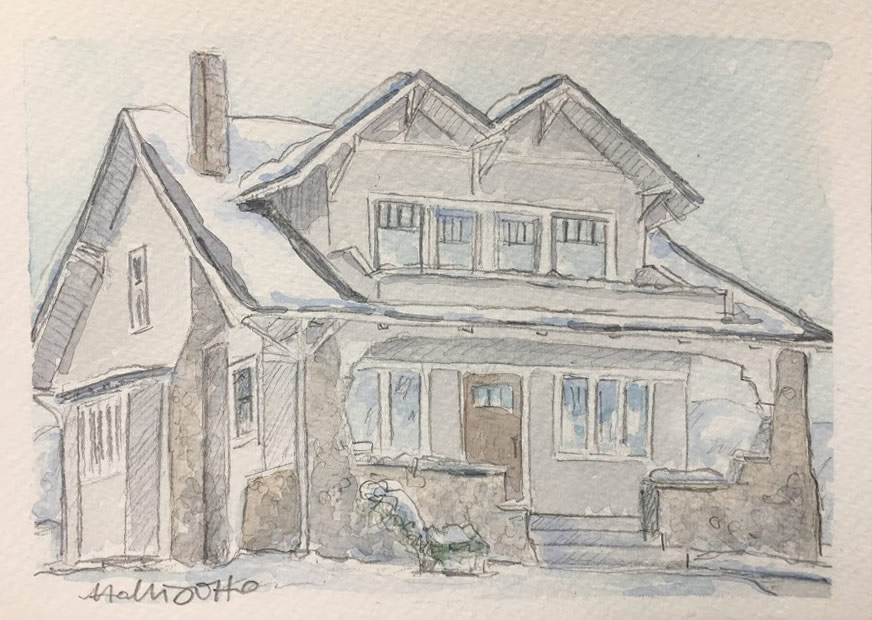 Over the past few months we have been on a mission to locate the first home built in the Yalecrest neighborhood. What seemed to be a simple task at first, turned out to be much more complicated than we expected. Even with our best detective hats on, we couldn’t sort out the handful of conflicting reports and say with certainty which home, indeed, was Yalecrest’s first.

To get to the bottom of the mystery, we asked Cottonwood Title if they would be willing to help us research historical records. Joey Stevens, title researcher, took the lead and spent considerable time sifting through county title records. He eventually traced the first home to 1555 E. 900 S.

We approached current owners, Graeme and Gina Cox, to find out more about our neighborhood’s first home and its turn-of-the-century Arts and Crafts style. The Coxes graciously welcomed us into their home and shared the history that had been passed down to them.

According to what the Coxes were told, their home was one of twelve original homes built in the Yalecrest neighborhood. Before the neighborhood was subdivided in 1913, contractors began building homes near East High using surplus materials from the school’s construction. While it saved the contractors money, it failed to save them time. The homes took many years to build as they waited for materials to become available. Ground was broken at 1555 E. 900 S. in 1905 and wasn’t completed until 1912.

With the exception of the now-enclosed back porch, the home’s structure has remained nearly the same as when it was built.The family they bought their home from had lived in the house for over thirty years. When the family sold it to the Coxes, they sold it with the understanding that Graeme and Gina would preserve and maintain the home’s historic character. The Coxes have since put their, “heart, sweat and tears,” into preserving Yalecrest’s first home.

In the process of discovering the history of our neighborhood’s first home, we also discovered an extraordinary couple. Graeme is a University of Utah men’s tennis Volunteer Assistant Coach and a former player. He has won two, 40s and over Indoor National Tennis Championships in singles and reached the finals in doubles. Dr. Gina Cox is a family practice and OB physician at Foothill Family Clinic. She specializes in providing maternity care and believes getting to know the families in her practice is one of the greatest privileges of being a doctor.

Many thanks to Joey Stevens for researching and the Coxes for sharing the history of our neighborhood’s first home. Please contact us with any questions or comments you have!