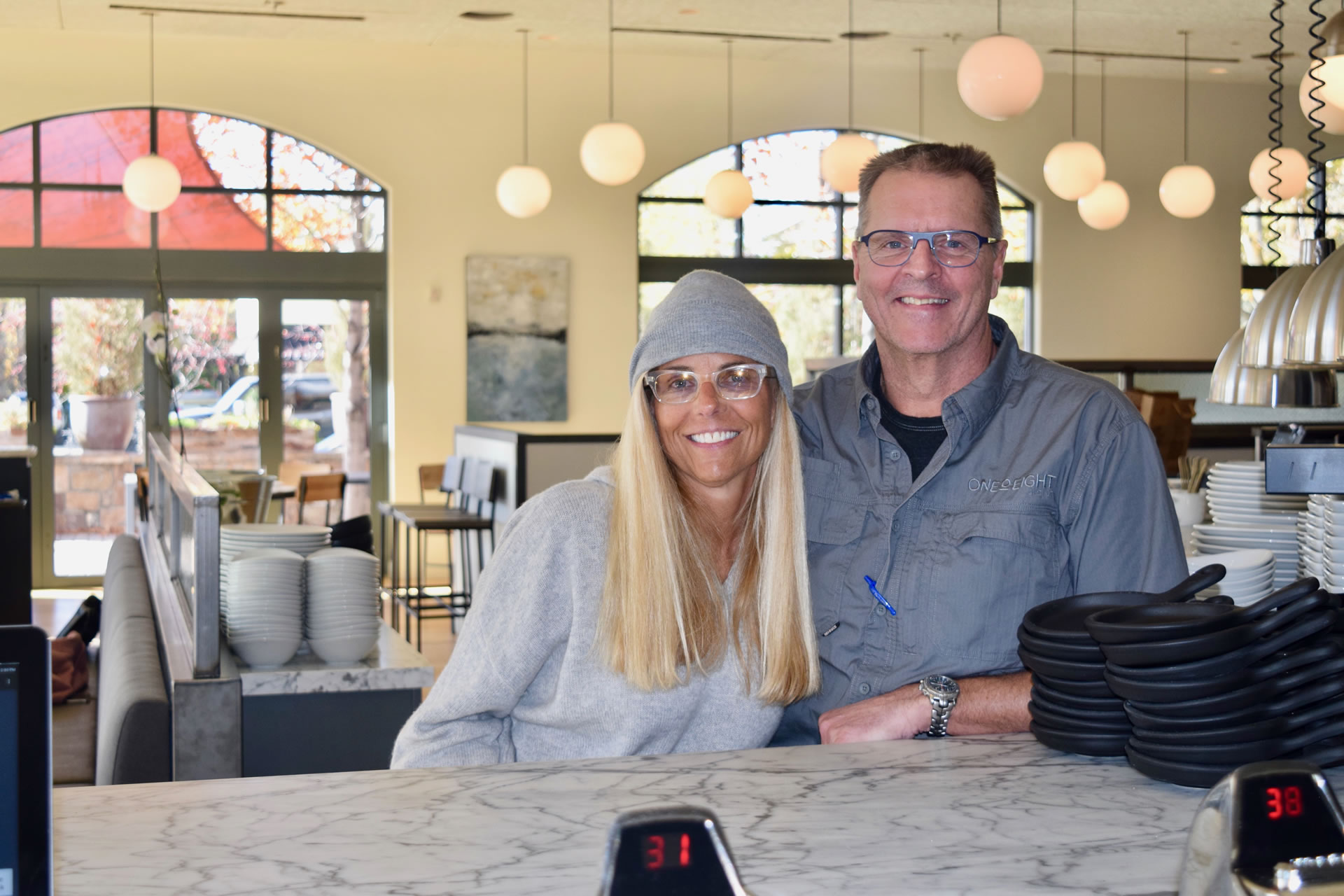 The line between love, family, friendship, community and food is a blurry one for James and Kris Dumas. A friendship struck on the slopes of Deer Valley over 20 years ago is now the heart of a marriage. It is also the concentric point to some of Park City’s best-known restaurants: where James served as executive chef at the Goldener Hirsch and the nationally-acclaimed High West Distillery & Saloon; and Kris expanded her talent from home chef to pastry chef to restaurant consultant while raising their four children.

Serendipitously, their newest restaurant, OneOEight (pronounced 1-0-8), is just a few blocks from the Dumas’s home on Michigan Ave. James and Kris moved their family from Park City to Yalecrest just two years ago. “We liked the Yalecrest neighborhood, because it felt like something out of a greeting card,” Kris muses, “babies in strollers, neighbors walking dogs, people walking to the grocery store…” James thoughtfully interjects, “It reminded me of the towns that I lived in while working in Switzerland; Salt Lake City has a lot in common with Europe’s alpine cities: the same food seasonality and access to alpine sources.”

It was pure luck that led the Dumas’s to OneOEight’s location on the corner of 1300 South and 1700 East. Just a week before the troubled Sea Salt restaurant closed, they had met with Greg Ross and Phil Winston of Northstar Builders about opening a restaurant in Salt Lake. “It was a very preliminary meeting,” James explains, “but when Sea Salt closed, we just went for it.”

Kris set about designing the space to create a hipper, cozier atmosphere: she partitioned the previous open-floor layout and added more comfortable booths, incorporated industrial hardware and fixtures, and built out an open-interface, residentially-inspired kitchen. “It was pretty crazy the last time I did this: trying to juggle a family and open a new restaurant. At first, I wasn’t so sure about doing it again,” Kris admits, “but once I dipped my toe in, I really liked it.” Her design takes cue from some of the Dumas’s favorite restaurants around the country, including The Smith in New York and several of their favorite haunt’s around L.A., where their daughter attends school.

They also put quite a bit of thought into the character of their new restaurant. The name, OneOEight, comes from our neighborhood’s zip code, 84108, and is also considered an auspicious number in the Hindu religion. “When Kris and I were starting to think about what we wanted this restaurant to be,” James shares, “we really wanted it to be an extension of our home and our kitchen—a kind of neighborhood kitchen—a community-centric place to eat and hang out.”

James and Kris also brought some of their most trusted employees with them from High West Distillery. Chefs Kevin McDonald and Sunthila Krishnamurthy along with Caleb Hathenbrooke (another Yalecrest local) at the front of the house are more like family to the Dumas’s after years of working together.“The first grand opening night really felt more like a neighborhood or family party,” Kris smiles, “It was a bit like living in a movie; a time where everyone lived by each other and knew each other. It was really amazing.”

The Dumas’s look forward to expanding their hours and serving the needs of the neighborhood. “Eventually,” James mentions, “we plan to offer chez all day: where you can slip in the back door and grab a cup of espresso and a pastry anytime.” Both James and Kris are insistent on this venture being a cooperative one. “We want our customer’s feedback: what did they like, what didn’t they like, what would they like to see more of. We plan to be a part of this neighborhood and community for a long time.”