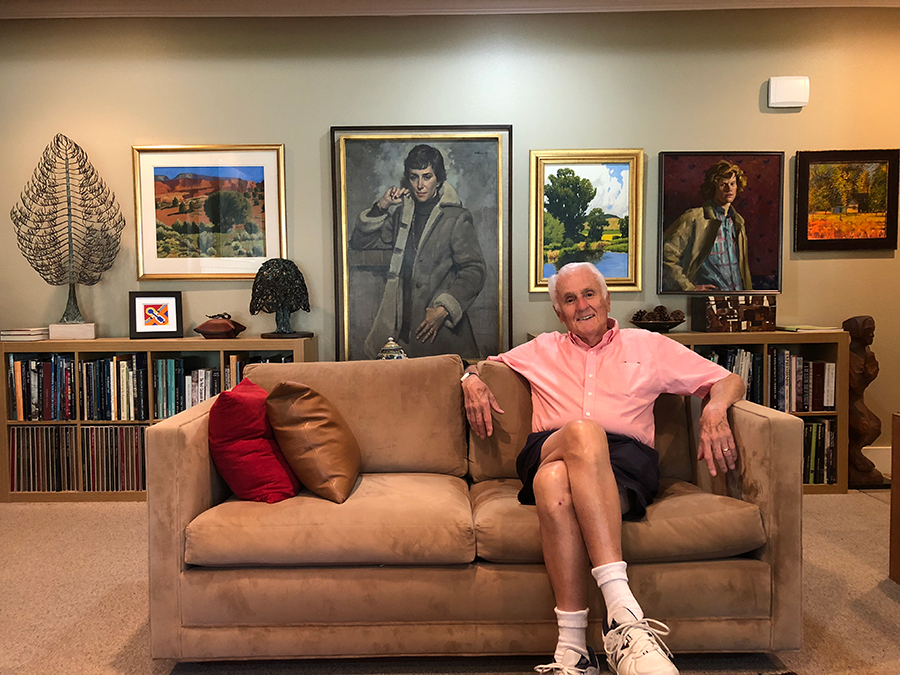 Don’t be satisfied with the world as you find it.

Question your view of the world.

Find out where you belong and where you can prosper as an individual.

Find something that you are passionate about, and do it.

Keep your head out of the Smartphone, all good things have their downsides.

In July, we had the good fortune to list a stunning home at 1888 Hubbard. It was remodeled in the late 1980s by renowned Salt Lake modernist Ron Molen. Coincidentally, it was the second Yalecrest-area Molen home we had toured in just a few weeks time. It was a sure indication that chance, or fate, had placed Mr. Molen in our path. With the help of Lloyd Architects, we tracked Molen, a youthful 89, down.

Molen affably agreed to have us over, and gave directions to his home in the Forest Dale neighborhood. The tell-tell signs of an artist hung in the wide public stairwell leading up to his second-story condo; like bits of bread—plein air pastels, oils and watercolors, semi-abstract compositions—up the stairs and down the hall to his front door.

Molen opens the door with neatly combed wet hair, a well-pressed salmon collared shirt, navy shorts, white athletic socks, and brighter white athletic shoes. He apologizes for being a bit late. “I was out swimming. I swim every day; but today,” he clicks his tongue,”I lost track of time.”

The trail of gorgeous paintings continues inside. The walls are covered with stunning Utah landscapes and portraitures: all compositions by his wife, himself or other famous local artists he ran (sometimes literally—he took up marathon running in his 40s) in circles with over the years. “The paintings outside in the hall are mostly Norma’s, a few are mine. My favorite pieces of hers I keep here,” he points at several pieces in the front room and hall as he walks. They both, he tells us, have works displayed at the University of Utah and Springville Museum of Art.

We sit down to talk. A larger-than life painting of a young Norma stares over Molen’s right shoulder. His muse passed away last year and his grief is still palpable.To the right of Molen, peering over his left shoulder, is a portrait of a moody young man. Steven, he tells us, was their brilliant, gentle boy; he was shot and killed along with his girlfriend by her ex-lover in an Indiana University dorm room. He was 20 and an aspiring writer. “So much potential,” he says turning to look over his shoulder, his voice trailing off.

“Now that painting,” he brightens, “has a remarkable story. When Steve was at Roland Hall, he went with a buddy to art class; the art instructor was Randall Lake. Lake just loved the look of his hair—his wild mane—and asked if he could paint him. He never finished it, but after Steven died, he called to ask if we wanted it…you know, what do you say to that?”

Steven’s painting is a tangible presence of another passion Mr. and Mrs. Molen shared: advocacy. Following his death, the Molen’s founded the Gun Rights Prevention Center of Utah. Molen is still active in lobbying local and national politicians. “Never,” Molen says, “is the cause more urgent, more pressing than now.” As Molen continues to talk about his life, it is clear that architecture is just one facet in a divergent set of talents he has proudly cultivated since the day his father drove past Frank Lloyd Wright’s Robie house on the way to church and muttered, “Damn fool architect.”

While he still talks passionately about his work as an architect—particularly his groundbreaking and nationally-acclaimed Westshire subdivision, his residential work in the upper Avenues and his commercial work in Salt Lake City and Park City—Molen is just as interested in talking about his time as a marathon runner, his work as an author (over a dozen published titles), his environmental and gun-control activism and his close-knit family.

“Activism, architecture, art, running, writing,” Molen reflects, “I’ve only ever just followed my passion, and my interests. I’ve never really set out to be something, but to do something. Activism and creativity are, in my mind, almost one and the same: you aren’t satisfied with the world as you find it.”

For more information on Ron, his life, his architectural work and contribution to Salt Lake’s mid-century movement, visit slmodern.org.