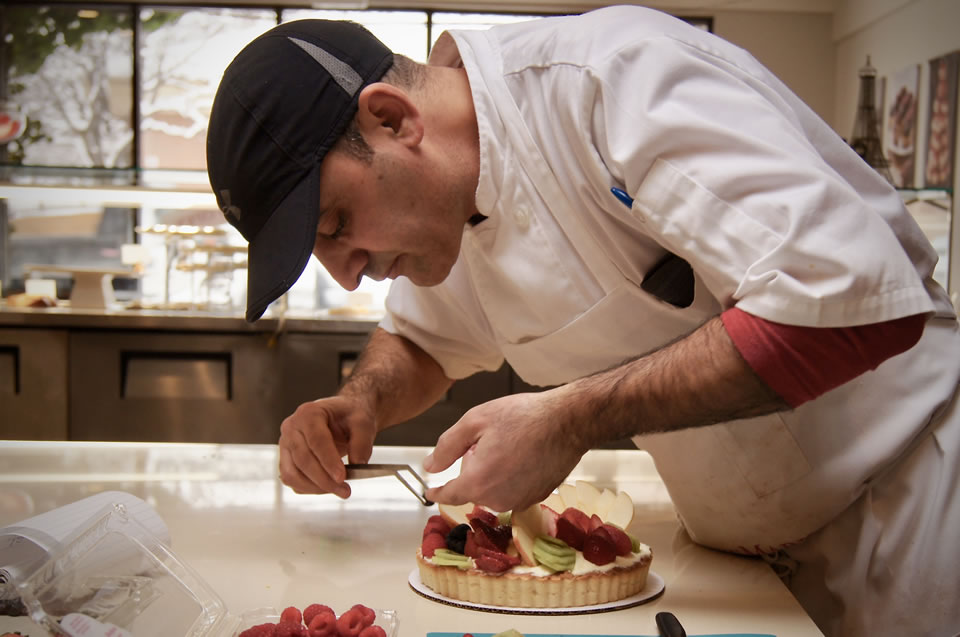 The first lesson in eclairs is simply this: that an American eclair and a French eclair are not the same dessert. Other than form and name, they are continents apart in taste. An American eclair is made from frozen ingredients such as frozen pre-separated egg whites and yolks and frozen pre-made cream. A French eclair is fresh: freshly separated eggs, freshly stirred creme, freshly picked or ground ingredients. And, heaven forbid, there is no margarine, shortening or any other fat other than butter and cream in a French eclair. As Julia Child precisely stated, “If you are afraid of butter, use cream.”

Mondher and Angela, of the newly opened Eclair French Pastry, know a bit about a true French eclair. Between the two of them, they have over 50 years of culinary experience. Mondher has extensive French culinary training in Africa, Europe and the United States. Angela grew up making wedding cakes with her mother and managing the bakery counter at Harmon’s. They met and fell in love at Mondher’s bakery, Le Gourmet French Pastry, in Memphis, Tennessee.

They also know much more than the average American about fresh. For the last nine years, Mondher and Angela have raised their family in Mondher’s home country, Tunisia. “You learn to live with the seasons,” Angela explains, “every market is a farmer’s market.” She reminisces about the donkeys that would walk through the city carrying fresh fruits and vegetables, and the vendor down the street where she would buy her sachet of milk.

“We want our ingredients here to be as close to fresh as they were in Tunisia. It’s not always possible, but that is a standard for us.”

It was a difficult decision for Angela and Mondher to move from their idyllic home in Kairouan. They leave behind a thriving four-story commercial building and a popular European-style pizzeria. A pizzeria, it should be noted, where customers were known to drive hours and hundreds of miles to eat wood-fired crust with Angela’s handmade mozzarella.

Their plans are to stay in the Utah while their children attend high school and apply for college. Angela is happy to have her children near family again. Mondher is enjoying the beauty of the snow-capped mountains and learning to live with all the associated inconveniences.

If you get a chance, stop by and say hello to Mondher and Angela. You may be lucky enough to smell the butter baking in the oven or the cream simmering on the stove if you visit during the morning hours. Or even luckier, watch Mondher skillfully top a tart or pipe a meringue. We recommend you try a pistachio or lemon eclair, or taste one of their fresh tarts or sable cookies. You’ll recognize the taste of fresh fruit, cream, and butter, and maybe just a hint of something that leaves you thinking of farther shores.